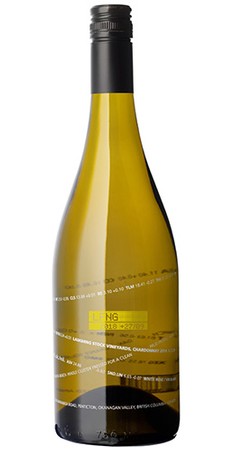 Making a well-balanced Chardonnay is a challenge that requires both a level of judgment and restraint to fully showcase the fruit characteristics, together with fullness and finesse.

INSIDER TIP: One of our Small Cap wines, with a limited production of 442 cases.

This year’s Chardonnay grapes were sourced from the Naramata Bench and Osoyoos. The grapes were whole cluster pressed for a fresh fruit profile using gravity to settle the wine and then put into French oak barrels. A natural partial malolactic conversion was allowed to occur. This combined with lees stirring created complexity and a sense of balance that doesn’t overpower the fruit flavours.

2018 was a long, moderate vintage, slightly cooler than the 5-year average but similar to the long-term norms of the Okanagan.  The winter was mild, the spring cool, thus resulting in a somewhat later bud break, followed by a uniform and healthy flowering.  The summer was a typical Okanagan summer, hot and dry, which allowed for optimal fruit development.  In August, the temperature dropped and the smoke from local wildfires caused a constant cloud over the valley, blocking the sunlight.  This slowed photosynthesis and delayed veraison.

Harvest commenced on Sept. 19 with Pinot Gris from OK Falls.  September was cooler, which forced a longer growing season and allowed for a steady pace of grape harvesting.  The fall weather continued to be warm up until the beginning of November when temperatures dramatically dropped.  The last of the Bordeaux Reds were brought into the cellar Nov. 2, just in time to avoid processing outside in the cold.  Overall, expect nice flavour complexity, slightly restrained alcohol levels, balanced acidity and freshness.